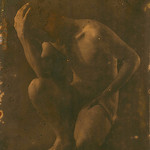 So apparently I can scan these things. Who would have known? I did end up putting a tiny scrape on my scanner glass, which makes me a little unhappy, but life goes on, right? The scans, of course, are NOTHING compared to the real deal, which are reflective shiny multi-layered goodness. Some people have used the term "holographic" in an effort to try and pin the effect down, but I am not so sure how to describe it myself. It just makes me happy

These are prints of one Gordie Parham, a very pleasant model to work with. They were created using Black Magic Liquid Emulsion, painted onto copper plates and exposed in a darkroom using digitally created negatives. The various forms of degradation and distortion, I think, really contribute to the work.

The original black and white images that I used to make these, as well as the rest of the pictures from that set, can be viewed here.
Posted by Shannon Buchanan at 3:02 AM 1 comment:

They say art is suffering, right?

This links to an album in Picasa. Not sure if I like the service or not yet, we will see. I never got around to making proper scans of this series, and I am sure a lot of you have seen them before - just, with much worse quality. This is a set I did for my Drawing II final. It deals with my genetic condition, Fibromyalgia, which I have here anthropomorphized with the plague doctor characters. I didn't want pity, rather I was seeking to express the best I could something that most people could not see or understand. I don't know why I chose to make 20 self portraits at this particular point in my life, with the shape I am in, but then again, maybe that's why I did it at all.

One thing you can't get a good idea of is how they look altogether, unfortunately, with their mismatched colors and occasionally frayed edges. All of the paper was stained by hand using various methods, and the whole thing really pops when hung up nice and pretty.
Posted by Shannon Buchanan at 11:27 PM 1 comment:

via Jack Crossing and a little help from TinEye.

I've always sort of loved this dude, even if he is super popular on the internets.

I can't remember if I posted about Junk Culture before. It's pretty great, though.

Victoria Reynolds sure knows how to handle meat. Check out the other artists at the gallery, too.

Recently Pale Horse Gallery in St. Pete had a pretty big reception I am sorely sad I missed. It featured live painting by local artists Bask and Allen Hampton. I really like the work that Hampton creates using his own blood.

I found this wonderful woman through Bask's site. She makes me want to give up on art, truly.

I can't give up too quick though, because I really want to check out some of the Florida Hackerspaces.

Whelp, that's all for now, kids, see you next time around.
Posted by Shannon Buchanan at 11:54 PM No comments:

So last semester I took a class on alternative processes in photography, basically work with painted on photo-sensitive emulsions and the like. It was a terribly large amount of fun. Anyway, I was super lazy and just got around to scanning the bastards. Click on any image to open it full-size. 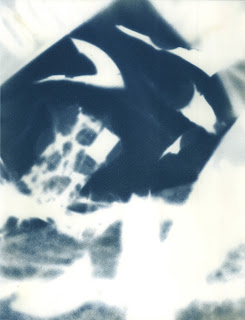 This is the first picture I created using the cyanotype chemistry. It's a very simple contact print, as are the next two (one of them using a different formula, thus the different tone). After that point we started using negatives printed on transparency film. 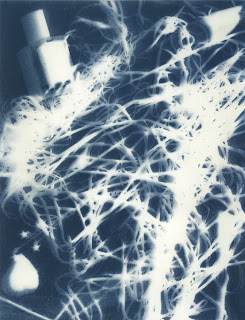 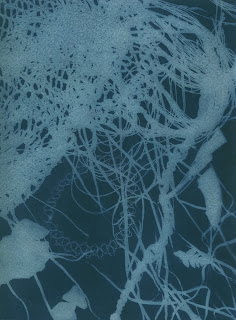 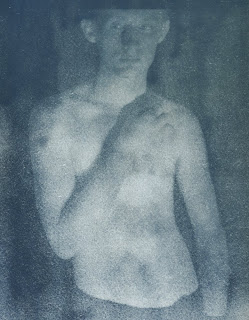 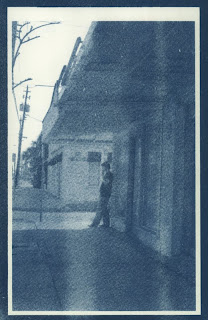 The negatives I used were actually old images I had lying about that I thought would be interesting for the process. The first came from my Object shoot, the other is of my old roommate in downtown Tampa... I actually printed this in reverse, by accident. Easy mistake. 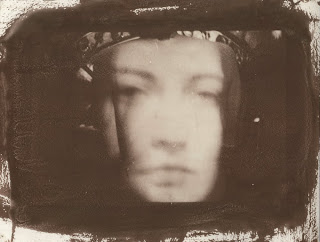 The next process we worked with was Van Dyke, which yields that lovely brown. I experimented more with the brushing and application of the emulsion this time around, and frankly I adore the results. With the Van Dyke in some cases I took images originally on 35mm film and enlarged them for use in contact printing using litho-film. I think the litho images are much crisper than those made using the digital prints, but I don't think it's impossible to get the same results with practice. 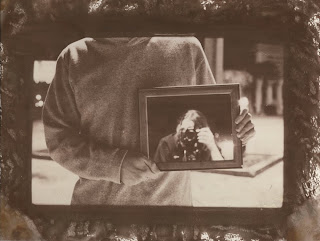 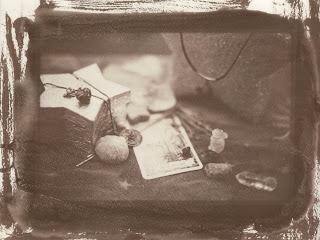 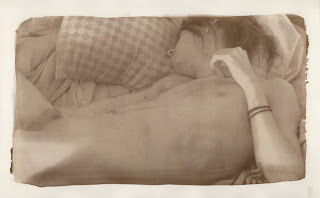 The incorrigible Zillah, of course. Oh yeah, NUDITY. I guess I should have had some forewarning or something? Nah... 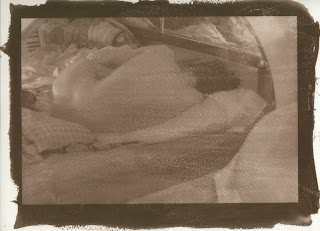 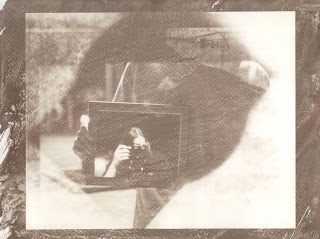 This is actually a happy accident. A piece of litho-film was accidentally exposed by two of my other negatives and some random things in the lab. I decided to actually make a print with the result, and I love the way it turned out. So much of working with processes like this is straight up experimentation. 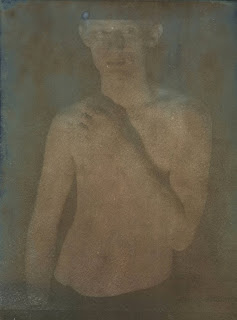 Speaking of experimentation... For all I know, this image is unique in the world (well, I mean, other than being a unique print). It was originally a cyanotype image that turned out too dark. I coated it with the Van Dyke chemistry and re-exposed it (all these processes work by exposing the coated paper to sunlight with a negative placed on top, everywhere the light hits becomes dark). When I first pulled it from the wash I was ecstatic, the colors were to die for, but it darkened OBSCENELY during the dry down process. I didn't feel like writing it off as a loss, so I asked around and got some ideas. I acquired some potassium ferricyanide, which is used as a bleaching agent in silver print photography. Now, cyanotype is not a silver process, but the van dyke is, so I figured it might prove interesting. What you see above is the final, ghostly result. 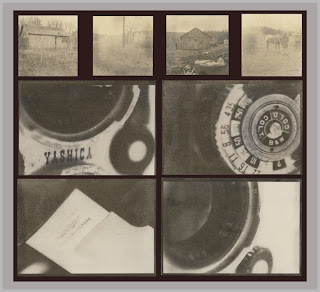 Last but not least were the palladium prints. As the name suggests, instead of using silver (the standard) these prints are made with palladium. I had the most difficulty with these, of all the processes, mostly because the printer didn't get along with me when I tried to create the negatives. This work is actually, conceptually, about my father. The images at the top are images he took of my mother in their old home, and the ones at the bottom are mostly of the medium format camera he used to make those negatives. Make of it what you will, I like to leave things open ended.

Posted by Shannon Buchanan at 7:06 PM No comments:

So I am reacquisitioning my old blog to be a full on art blog. I decided to keep a lot of the old posts because, well, they are interesting. Feel free to rifle through them, and you can hopefully expect more of the same.

You see, I feel like a lot of the content I have been making lately has been lost to the winds in various locations, and that perhaps it might be better to consolidate my efforts in one place. I am currently working on making a new and improved spiffy shiny website, so there is that to look forward to. I need to borrow a camera and do a lot of proper documentation of the masses of work that have built up in my apartment, and of course nail out some graphics and all those other lovely technicalities. But the drive is there. And that's what matters, right?

Anyway, this blog is now the intended companion piece for that site. I make a lot of art, and perhaps not all of it needs to be on a clean structured, look-at-me-I-am-oh-so-fancy portfolio site. The rest of it will probably sink into the archives here, but at least will be accessible for those curious enough to go digging.

And let's get to it!
Posted by Shannon Buchanan at 6:57 PM No comments: