This is the story of a project that sort of came, was, and fizzled out. I have a finished result, but I am not exactly happy with it, so feel.... disinclined to share.


The original idea for Dream-Eater was as follows:

The project would take place in two parts. The first would be in which I place papers around well trafficked areas and perhaps create posts on online sites in which I would ask, anonymously, for people to send me their wishes in one or two sentences. To this end I would print out fliers with my request and large blank spaces in which to write. I would gather these wishes up at the end of a pre-determined time span.

The second part would involve me hand writing these wishes onto an edible rice paper (or similar) and placing them into a decorative box. I would then film myself taking out each with, one by one, reading them and then devouring them and taking them into myself. I would most likely use some sort of costumery to “deify” myself.

I started posting fliers around the USF area. I got responses within hours of posting them, so things were already looking well.

I also had some conversations with my friend (a painter and performing artist who does costuming similar to the kind I want to feature) about the makeup, and it led to discussing camera angles and the personification of western and eastern type gods and how they are shown and "read" as deities.


I also posted to various online outlets and wait for people to give me their dreams.

So of course all of my fliers got taken down for reasons unknown. Cleaning staff? Zealous students? Hard to say. Similar posters had stayed much longer. That put me in a bit of tough spot of course... all of my material had vanished into thin air. After a bit of panicking, I considered my options. I could solicit the internet some more, though that'd had very little success before, or I could ask random pedestrians, or find some other source of wishes. I asked some of my classmates, but realized this was the long slow way of doing things and not exactly the best use of my time.

So what was a girl to do? I started searching the phrase "I wish" in Google, but only ended up with song lyrics and websites. So, in a stroke of genius, tried the same search on Tumblr and Twitter. Tumblr was a little too image heavy, but twitter was a gold mine. Over a couple hours I had a treasure trove of shallow, vacant desires. This of course drastically changed the feel of the piece, but I was not opposed to this new direction. Besides, we used to burn our wishes to send them away to the gods, and aren't tweets a little like that?


I wish I had all the weed I have ever smoked in a huge pile sitting in front of me. So I could smoke it again.
I wish I didn't get attached because this is killing me.
I wish Susan Rice would just blame this whole thing on Saddam Hussein so John McCain could feel safe again.
I wish halo gave out double xp codes for buying unsweetened tea or water or something. Anything but Mountain Dew
I wish I could press select and delete all of your clothes.
I wish I had a younger brother who was cool and came to me for girls advice and that. But no, mine showers annually
I wish I was in Egypt now.
I wish people would be more thankful for what they have....most seem so grumpy nowadays.....try living in a third world country!
i wish it was falling nuggs of weed instead of snow
I wish I was born in the 50's or 60's
I wish my eyes could take photos!
I wish Warren Buffett would stop writing op-eds and just write a check to Treasury to assuage his guilty conscience.
I wish I had a window seat with lots of pillows that I could sit by whilst I drank tea and read books.
I wish I had a theme song that played whenever I did something awesome.
I wish I could bake a cake made out of rainbows and smiles. I just have a lot of feelings.
I wish I could record my dreams and watch them later.
I wish I knew the people from twitter in real life... The majority of people I know in real life should be drowned at birth...

I wish I was a twitter whore :(
I wish all commercials were just fat guys talking about sandwiches
At this point I wondered if I should include wishes I got from before they removed all of my fliers, and contemplated what sort of costuming I should wear, what sort of setting I should use. In the meantime, my conversations with friends had wandered into what evokes goddess or spirit, and what kind of god I would be if I were the sort to eat Twitter wishes. The latter actually affects the look quite a bit. I can't help but be reminded of ravens, who like to collect shiny things, and how a god like that might resemble one, covered in discarded bits of knick knacks, feathers, and cloth. I may still opt for a more traditional route.
I spent time making hair extensions and designing face paint. I chose a simple color scheme - blue on the top part of my face, red below, with red gradation on my hands, like the Indian women who dip their hands in henna or draw exquisite patterns for their weddings. I wouldn't be able to do anything nearly as elaborate (I would have if I were capable and had the time, and on my face as well), but I do love the idea of that sort of color and reference, since the deity in my head seems more vibrant and almost tribal. The red gradiant actually ended up being one of my favorite parts of the costume. Though, of course, I applied the paint too early during the day of the shoot, making doing anything without trailing red stains difficult. 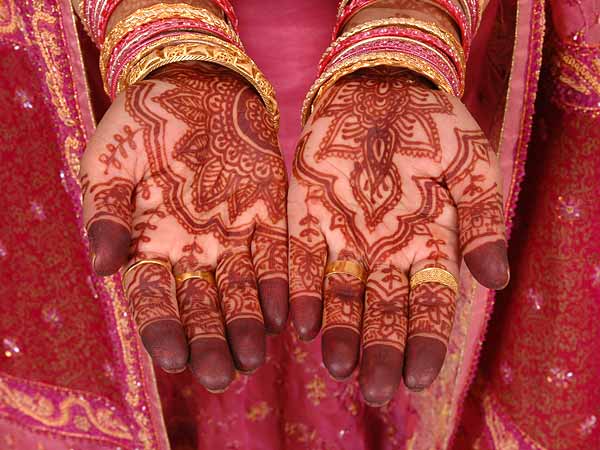 The hair extensions were made using real human hair of about my color (long story). I've made braids and threaded colored strings and adornments into them. I held them together with superglue. They were designed to be slipped up under a headband for easy use during the day of the shoot. Elaborate costumes are great, but spending hours doing my hair... not so much. Especially when I can use glue and similar when its not actually attached to my head.

I ended up using printable cake paper to record the wishes culled from twitter. There were hundreds of them. I cut them up then spent an afternoon in my Goddess get-up devouring paper. I had some help, and switched up the camera angles for variation. Unfortunately, I had not vetted the set-up well enough and the final video ended up quite a bit darker than I had foreseen. I attempted to pull it out in post, but with dubious results. I don't even have any good pictures of me in costume!

Moral of the story? Art is full of little failures, some of which you can run with... some of which spoil the soup. You win some, lose some, and make more art.
Posted by Shannon Buchanan at 10:09 PM No comments: