Is what this man does art? A form of curation? Or nothing at all? Well, whatever it is, I still think he - and this video - have merit.

This Is My Home from Mark on Vimeo.

Posted by Shannon Buchanan at 10:27 PM No comments:

So everyone has been talking about how one of the four copies of Edvard Munch's "The Scream" (the only one privately owned) is set to be sold at Sotheby's for some 80 million dollars. Not exactly paltry change, but everyone has been touting it as "one of the most expensive pieces sold at auction".

I find this a little bit funny, since, adjusted for inflation, it just comes in at 13th, 23rd if you included private sales. But I guess that's "one of the most", so I can't really knock them, but I still think people are making too big a deal about it. I heard the news from three separate sources just this morning.

For the record, this is the painting topping the list at an excess of 250 million:

Posted by Shannon Buchanan at 7:49 PM No comments:

I Cast My Eyes Out and Pull My Arms In

Ugh, I must NOT let myself build up this many links ever again. Alright, HERE WE GO. 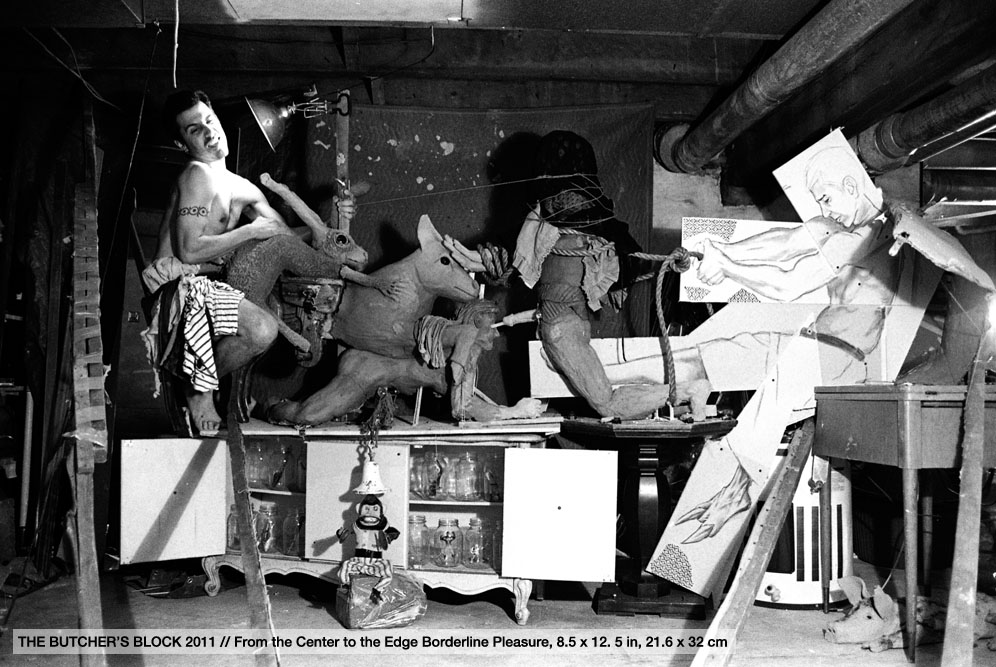 I saw Tim Roda lecture at USF on Thursday. It was an EXCELLENT presentation, one of the best I have seen here yet. I haven't enjoyed one this much since I saw Nina Katchadourian here last fall. Roda's work is made by assembling sometimes elaborate sets using household items and basic supplies, such as clay and lumber. The models are almost always himself and his family. He has worked from any number of states and countries, delving through his work into his own past (growing up in a self-sufficient house with his family) and his heritage (his family emigrated to the US from Italy). He talked about group shows and the ups and downs in his life, and how his art reflects and sometimes features those events. Each of these images, while easily standing on it's own with a distinct (if unknown) narrative, is in itself is a story that Roda is telling the viewer, something that means something to him, and even if that meaning is lost the weight of it remains.

Oh goodness Eric Yahnker, why did it take me two years to find your art? I sat down and went through all of these works just yesterday with my man, and discussed the merits of his art and particular brand of humor. And laughed. A lot.

While discussing my current project, featuring my darling Effigy of Agony, dark surrealism, and metal printing, Wendy Babcox reminded me of the work of Joel-Peter Witkin, which I am also sure was in no small part part of the inspiration for Nine Inch Nail's video for Closer (you can watch the video here).

Of late I have also been greatly inspired by late street photographer Garry Winogrand, especially for the photographs I have been taking concerning tourism in my local community.

Roberto Ferri is one of my paramour's favorite artists. Dark and surreal and done in the baroque style, the paintings are indeed exquisite.

Simen Johan's photographs are so masterful as to seem unreal. But then, that's sort of the point. While giving no hint as to their fabrication, they are actually digital compositions from hundreds of negatives that the artist takes in zoos and on location, as well as using a variety of sculptural techniques. There is, at it's heart, a dialogue about the strange relationship of the real and imagined worlds. 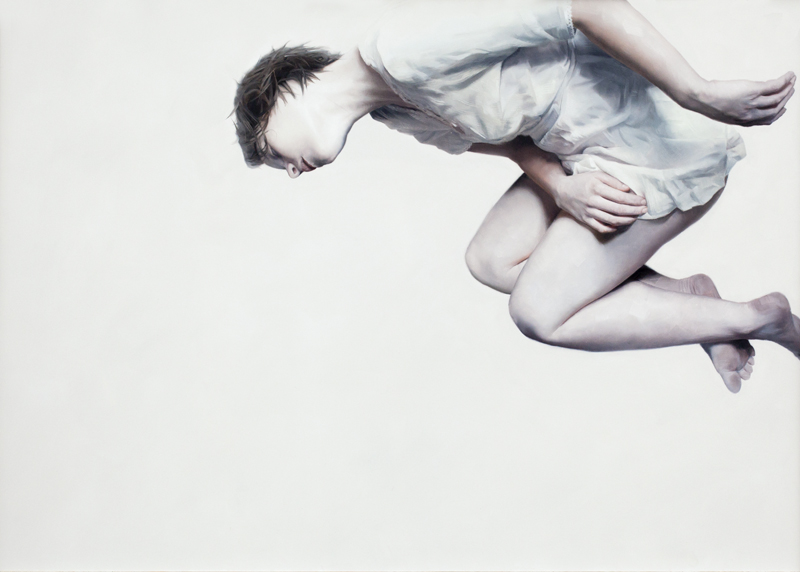 Did you know there was a mix of the colors yellow and blue that wasn't green? I wonder if this has something to do with why we end up with color-blind individuals...

Paul Brunelle also creates astoundingly realistic works, but this time in the field of sculpture, delicately rending birds down to the tiniest feathery detail. 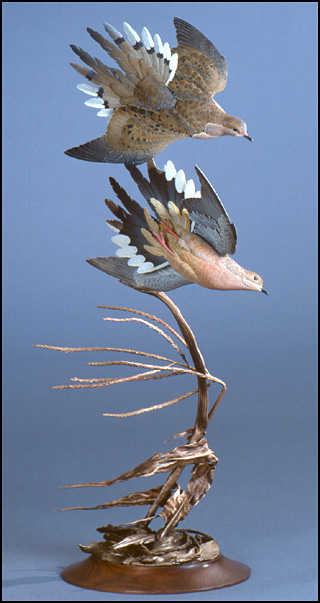 Nor is he the only one. Grainger McKoy creates meticulously crafted works featuring birds mid-flight, seemingly hanging in thin air. He details some of his process here. 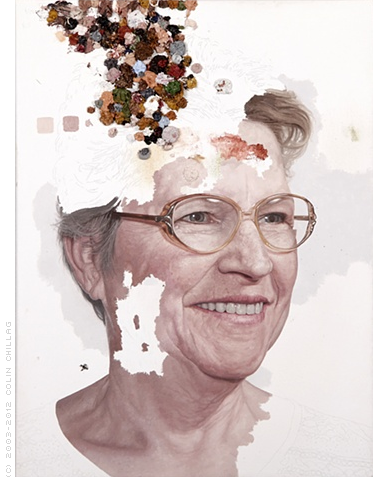 Recently much of my work has dealt with memory, something that painter Colin Chillag also apparently holds dear to his heart. His works reflect this idea, with some parts rendered to completion while others fade away into the very constructs of his art making.

The Pothole Gardener is a blog about a guerrilla gardener/artist who uses flowers and miniatures to create art pieces throughout the streets of London.

Carrie M. Becker also uses miniatures, but in a very different way, to create her fantastic "Barbie Dream House" - as if Barbie, what with her shopaholic habits, had become a dreadful hoarder.

From a CalArts Exhibition on Women and Feminism. Work by Nate Page.

Steven Spazuk has made quite a stir online recently. He created pieces of art using the flame of a candle to leave soot on heavy paper. Colossal art blog has a create write up on it.

The worlds largest camera is in the process of being built. The aim of the project is to document and create awareness for the world's vanishing cultures, creating massive negatives rich with layers of detail impossible to achieve with any other medium. 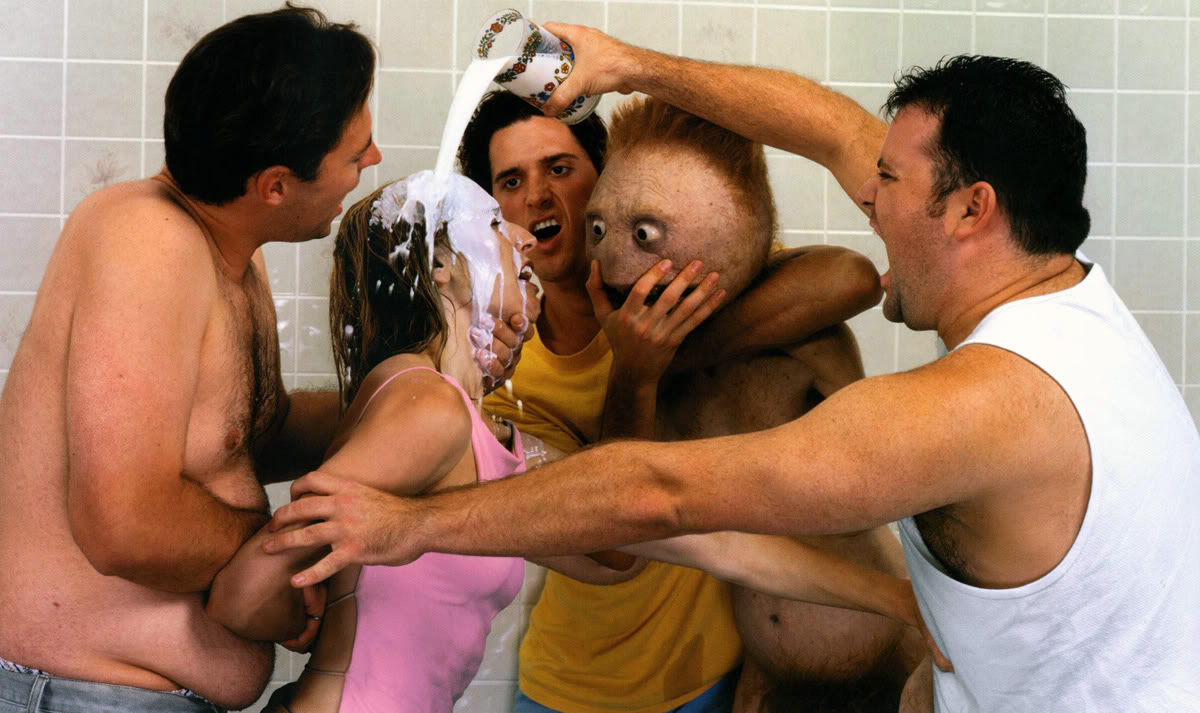 I have been aware, and fond of, Charlie White's work for many years now but for some reason never featured him here. Well, better late than never. He rose to fame largely for his series "Understanding Joshua," of which the above is from.

Scott Campbell is a tatooist and artist who creates a variety of different art pieces, including sculptural works carved into stacks of dollar bills. The piece above, perhaps his largest work, is composed of $11,000 worth of them.

I love a good double exposure, and Matt Wisniewski makes excellent work of them, as well as a number of other techniques. I really love these pieces.

Joel Sartore has been working hard on his Biodiversity Project, trying to capture a wide spectrum of animal life as best he can in an effort to raise awareness in conservation efforts and endangered wildlife. National Geographic has some stunning images of his efforts, and NPR did an amazing write up on it.

"One Day on Earth" is the project of Kyle Ruddick, featuring a compilation of film shot all over the globe on a single day: October 10, 2010.

David Lyle is a fairly new artist, and I find his black and white paintings charming and witty.

Source unknown. I pretty much hate sports, but love this picture. 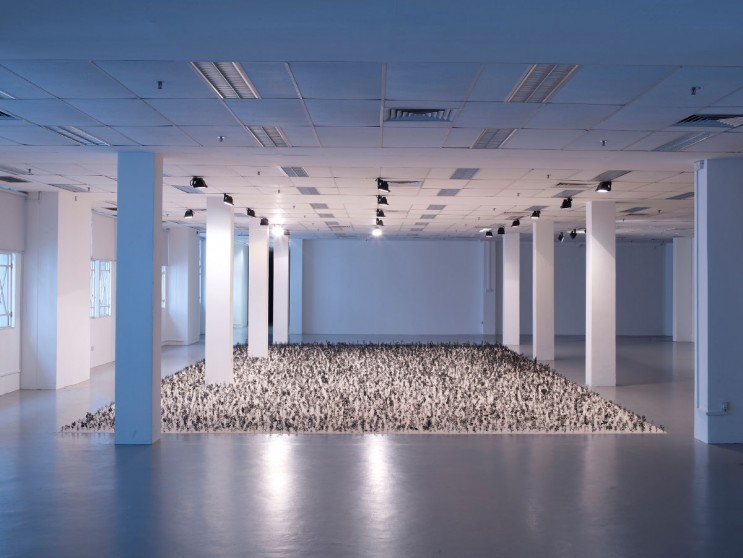 Zadok Ben-David, of Yemen, is responsible for the wondrous "Blackfield", a field of cut metal flowers, on one side black, the other in brilliant color.

A record player that plays slices of tree trunks.

"Photographer Hal" does some great photos, including a series of people, mostly couples, sealed in thick plastic, vacuum sealed. His site is a bit of a monstrosity at the moment, however.

Another Asian photographer, Mariko Sakagichi, takes pictures of herself in a traditional bath put in bizarre and sometimes awkward settings.

Posted by Shannon Buchanan at 12:00 AM 2 comments: 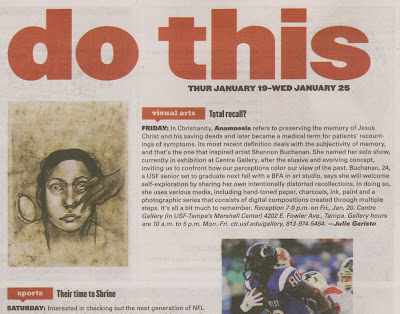 I know this is old news, but I finally got my scanner working again and felt like sharing this one-third page mention of my show in the January 19th run of the Creative Loafing. In a bit I might scan up some sketchbook pages to show you some of the things that have been going through my head lately.
Posted by Shannon Buchanan at 9:24 PM No comments:

Posted by Shannon Buchanan at 7:24 PM No comments: 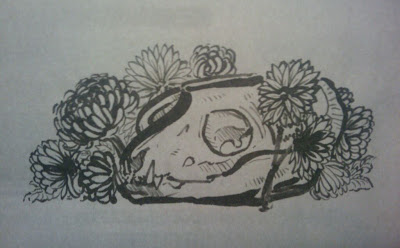 A ink drawing, or ink painting, whichever terminology you like. I've been learning Chinese ink brush techniques. The process involves repetition and memorization of certain strokes and idioms. The point being, once you get it into your very body, you can do whatever you like with the forms, like free jazz. Of course, I was a very bad person and did not much follow them. My teacher says... the Asian cultures, they find beauty in copying, in playing someone else's music. Americans, we all want to be composers and write our own music. I am somewhere in between, I think.

Sorry for the low quality, it's just my cell phone.
Posted by Shannon Buchanan at 1:06 AM No comments:

School Supplies for Afghan Children: The Importance of the Image

I have been working with a charity through the USF Honors College, School Supplies for Afghan Children, that strives to supply basic items like pencils and paper so that children can receive an education and hopefully rise out of strife and poverty. I blog there on Thurs, you are welcome to check out my work and follow it.

I make mention of this because this week I wrote about photography, the changing role of the media, the representation of war, perception, and other similar topics. I have discussed such things before, and while I had not perhaps realized it I'm beginning to become rather well informed of the topic. But then again, I dare not believe that for a second, because there is always more to learn, and it is only the fool who ever even thinks he has begun to grasp the whole of anything.

Anyway, I tangent. Check out the post here: The Importance of the Image.
Posted by Shannon Buchanan at 6:47 PM No comments: 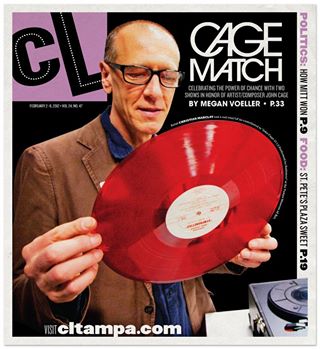 That's the cover for the Creative Loafing this week, showing a picture of Christian Marclay taking part in the current running exhibition in the Tampa Museum of Arts, one of two pieces showing last week in tribute to the one hundredth anniversary of the birth of John Cage, the other being the exhibition "Things Not Seen Before" in the Tempus Gallery.

Both shows are curated by Jade Dellinger, who I had the pleasure of meeting in person. He talked at length about both projects, from the process of randomly selecting the placement for the visual works in the Tempus Gallery (darts over is shoulder - Cage had a certain love for randomness, using various methods such as the I Ching in his own work) to finding amazing obscure albums for the Tampa Museum's "33 1/3", originally "performed" by John Cage in 1969. The Museum offers up more complete information on that show here. For more information on the Tempus Show, you can read up on it at the John Cage Trust's blog, which also dips into some interesting information about mycology.

John Cage's 33 1/3 is really an interesting piece in concept, but more so to see it played. I was lucky enough to come with a large group, so there were plenty of us mixing tunes on the 17 record players there. The records themselves were vastly varied, from obscure bands, sound effects and vocal exercises to well known favorites. The mix was bizarrely pleasant at times, and still fascinating when it was dissonant. Eventually the group mostly dispersed and I was left listening to a few albums play out - old folk tunes (an album with a bit of a story - Dellinger was told to track it down by the Residents, and it was by sheer luck and after some time that he stumbled across it via a collector of vinyl, a signed copy nonetheless) set to a backing of the Velvet Underground and Nico and one of Christian Marclay's notorious red records, though I am sad to have forgotten which one.

Sadly the Tempus show is now closed, but I urge any locals to check out 33 1/3 if they have a chance. Also being shown are works by Romare Bearden and William Pachner.
Posted by Shannon Buchanan at 6:16 PM No comments: