To "fix" a photo has different meanings. When we still operated in darkrooms we would use fixatives to stop the paper from further developing, we would “fix” the image to the paper.

We also get rid of problems, we edit and repair and clean and touch up. We fix things. Photographs are an imperfect documentation of reality, distorted by the subjective view of the photographer. Regardless of intent they ascribe their own beliefs and understandings, their own vantage points, to the work. They choose, cut, crop, and decide from the beginning at what they point their lens. This idea is nothing new or unique, many have spent decades addressing it, such as artist and writer Allan Sekula, along with any number of art critics.

The photograph does and doesn't lie, it is high art and the basest form of art. Even in hard journalism we “clean” and correct, or outright mislead. The famous photo of the Kent state killings exists in two forms, one of which shows a poll behind a crying woman, bisecting her head. In the other, it has been removed for simple aesthetic reasons. To speak contemporarily, Reuters released an obviously doctored image of smoke over an Iraqi city, in another missiles are duplicated. There are questions about placing objects in situ and using what accounts to models to add planned grief and humanity to war photos. Most recently they came under attack for selectively cropping images released involving the Gaza flotilla, drastically changing the message and impact. Cropping is understood to be almost negligible as far as photo editing is concerned, but can have a profound affect on image. A photo represents a reality, it is a document, a moment in time, and here we are fixing our photos. Fixing reality.

There is another definition of “fix” that I did not mention before. When an athlete cheats a race, or an accountant fudges the numbers, they are “fixing” the results. A fixed race is one with predictable and exploited outcomes.

Photography, you see, is almost inherently a fixed result.

Posted by Shannon Buchanan at 2:58 AM No comments:

Where are you coming from? You yobs and hipsters right? Street art and DIY? Where is MY movement?

We embrace and denounce consumerism and kitsch simultaneously, us fucking hypocrites. We're so cool, so cool and pretentious and god damn hypocrites. Don't get me wrong, I'm one too. But we aren't that talented. I mean, everyone is talented nowadays. We love this democratization of art, but it leaves you without anywhere to put your feet down. You see, there are factories in China where they remake masterpieces over and over again without a thought. With billions of people and global communication, skill isn't hard to come by. It's absurdly Dadaist, if you think about it. Actual production is replaced by the abject and subjective. We sell ideas nowadays, that's where the money shot is. Suck it down, humanity!

So what about us. We are the pulp children, lost in space, but the great unknown has all been done before, and fuck all covered in ads and bottled and sold to us in tiny easily digestible chunks. We don't have a way left to rebel, we sell sensational because we were raised to feel sensational and nobody even looks at us. The more I look for the edge of the horizon, the more educated and worldly I get, the further out it goes, been there, done that. So where do we go but outward and up anyways, all the same? Have to go somewhere.

We are the space cadets, untethered out there. We can't give you any answers you haven't already heard. Just our own imperfect and obviously flawed subjective opinions. I don't really want to say it all over again, but I can't sit back and not speak. Because I'm a fucking artist.
God damn it, why did I have to be a fucking artist? 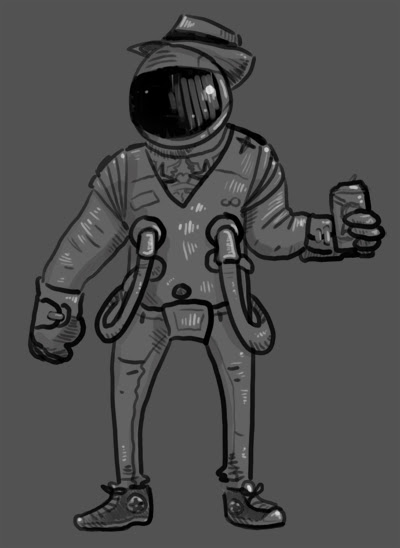 Posted by Shannon Buchanan at 2:55 AM No comments:

Yeah yeah, I'm not dead of course. Still no spiffy new site though, sorry to say. My resident code-monkey and I both got swept up in a new project: Dropost.it

Not that I have been sitting on my laurels. I have been busy documenting work, old and new, some of which needed to be re-digitized after an epic hard drive loss some many moons ago. I am sure you are now all going, well, WHERE IS THE CONTENT?

Have some random sketches, doodles, and artistic debris:

Posted by Shannon Buchanan at 2:05 AM No comments: So let's do some Hyperrealism (for example, the above painting, shown next to it's artist). If you are reading my blog you probably know that hyperrealism is simply the kind of work that one might mistake for the real thing. Realism to the extreme. A variety of artists and examples can be found on this blog.

Dru Blair is known for his photorealistic airbrush techniques, mostly of military based paintings.

Speaking of realism, Glico decided that they would just create their own pop idol.

I am currently being thrilled by the works of Stephan Balleux, the artist "hi", and Pat Perry.

Jeremy Geddes, on the other hand, can have my children.

Daniele Denero made some architecturally based sculpture pieces using paper and mold.

So there is a pretty awesome video that shows a collaboration between artists Supakitch and Koralie - a French street art duo who recently got engaged. You can find more at Supakitch's site as well.

I am sort of in love with Gregory Euclide's Held within what hung open and made to lie without escape. It is featured in the show "Otherworldly" alongside the godly Canal Street Cross Section.

Art collective "Dorothy" seems to be producing some interesting stuff, I like their Casualties of War in particular.

A very silly book of poetry and art from 1917, "How to tell the Birds from the Flowers".


Diego Fernandez has some pretty sweet paintings that remind me a bit of one of my favorite artists, Audrey Kawaski.

Shea Hembrey gives a talk on TED about how he became one hundred different artists for a project he created.

Thomas Hirschhorn created a gallery sized exhibition/installation piece that I absolutely adore called "Crystal of Resistance" for the Venice Art Biennale, 2011. Some more art from the Biennale can be found here.

My cross-country friend and artist Matthew Borgatti has a few blogs and many many projects. You can find his main site here, his tumblr here, and his storefront here. Go to them.

David M. Buisan makes some nifty illustrations, particularly of hipsters and the like, as does Sam McKenzie. 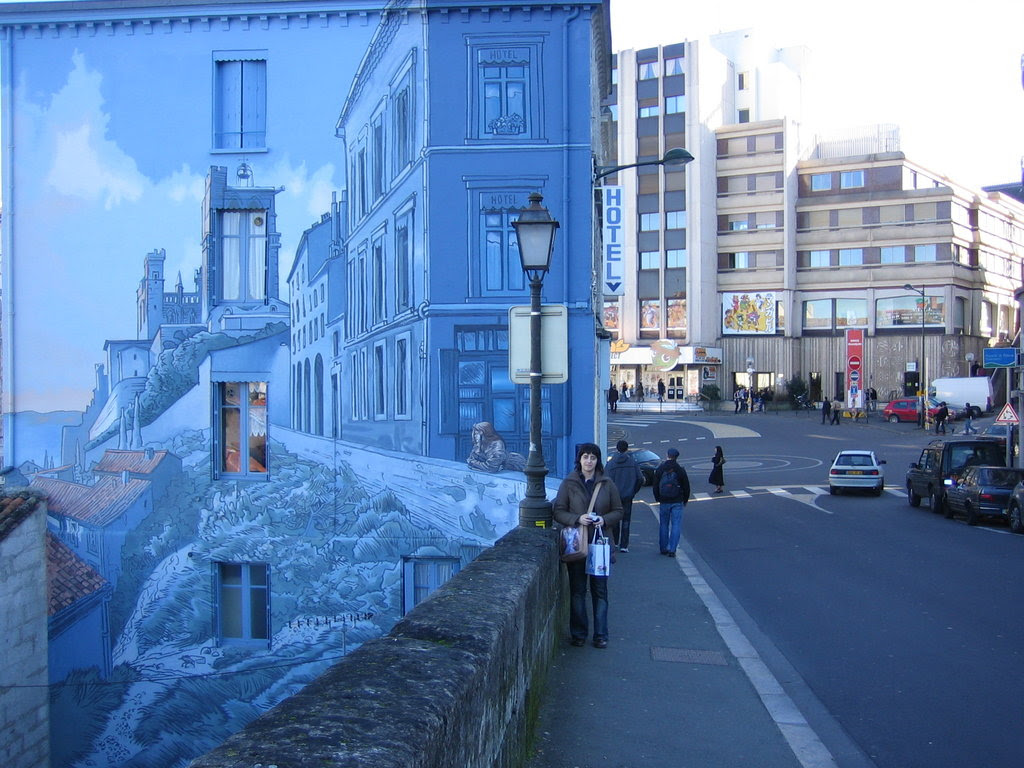 A photoblog devoted to urban decay.

Some fine examples of Moleskine art. I might need to buy another one myself soon enough, mine is almost full.

It's not the first of it's kind, and in fact I used to use apps like paintchat all the time, but here is FlockDraw, which allows you to use a mutual drawing board with your friends. It also allows you to use your Facebook to login.
Posted by Shannon Buchanan at 1:01 AM 1 comment: