I've decided to post some of the work I've been doing the past few months concerning my musings about entertainment, Florida, and other such topics. Now that I've totally teased you with my Effigy of Agony hints and snippets of course. The body of work has grown and changed around since then, as they tend to do, but I think I am just starting to get enough images for the whole of it to read as one piece or experience, and not just disjointed parts. Tell me what you think, I would love to hear the input.

Where on the spectrum lies novelty or "gimmick" art, things done just because they are strange and bizarre but might otherwise lack "artistic merit"?

Are these valid forms of art? Does that actually mean anything at all? Is anyone really capable of casting that value judgement - i.e. good or bad art?


Posted by Shannon Buchanan at 12:13 PM No comments:

Of Fish and Foo Dogs

I decided to share some sketches from one of the two moleskines I've been keeping, both new. Most are done with a brush pen, though the one is just a mechanical pencil. The other sketchbook is mostly full of mess, figure study, and other ridiculous. It is much lower quality paper and I therefore abuse it. But then, I think I really needed something to abuse, I treat my sketchbooks too kindly and perhaps I suffer for it. Many of these ended up in a collage I made. Which I don't have pictures of. Yet. It is currently not in my possession. I'll be working on that.

And also important photos. Yes, those. Shooting Saturday, still setting up. I don't know whether to be excited or terrified. 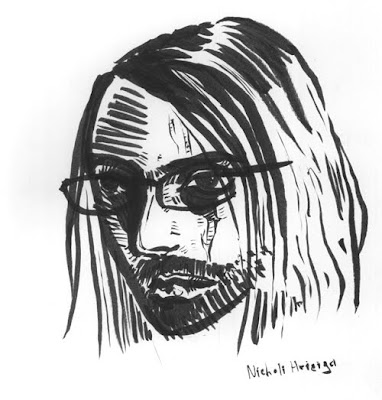 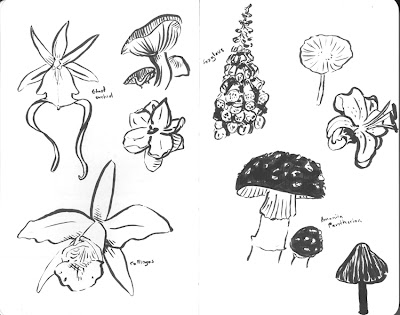 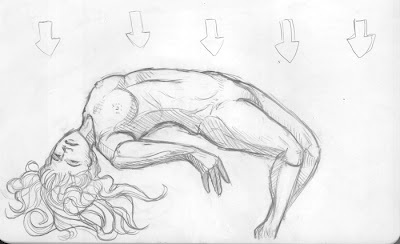 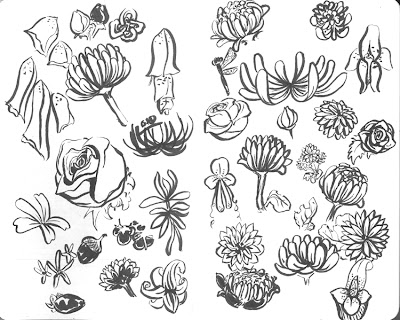 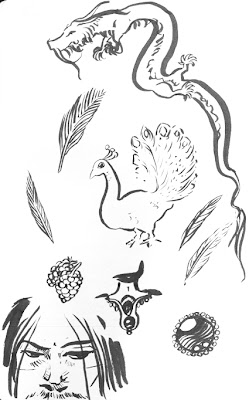 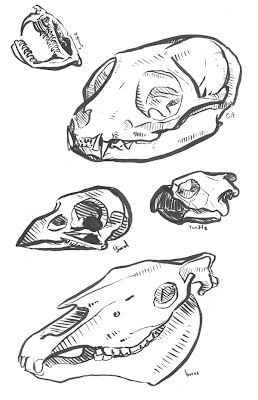 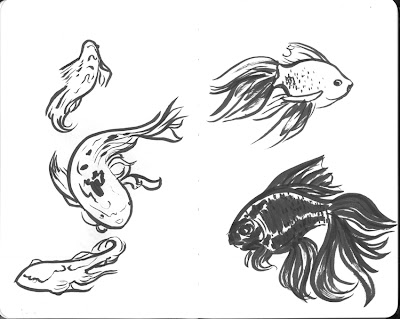 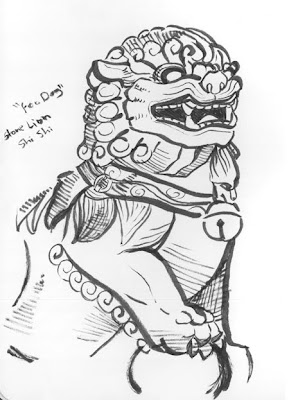 "Foo Dog" is the bastardized western term for Chinese stone guardian lions. I did this quick sketch from an easy to find photo because I had been thinking about them. We used to have a set in my house. Interestingly, "shi shi" (stone lion) is part of a long poem by Yuen Ren Chao which phonetically reads in whole:

« Lion-Eating Poet in the Stone Den »

The implication is as in English riddle poems (how is this so, how can this be, explain this matter) when really no answer is expected.

Of course, written out in Chinese characters it is more easily read, because while they sound the same the symbols are understandably different, similar to our homophones, for example 'deer' and 'dear'.

Posted by Shannon Buchanan at 6:10 AM 2 comments:

Sorry for the lack of posts recently. I updated my website some just now, the changes will occur... when they occur. It's a dubious science. I found a bunch of lost documentation, so some of it is older (I did not put up very much of my older stuff, a lot of it would best stay lost). I did put up some of my newer work from the Anamnesis show. In case you forgot, the link to my site is on the side panel, though I have no idea who could have gotten here without going there first.

There is much more to come... I just don't feel like getting to it this morning.

There will be even more in the next month, as I have been working dutifully to finish up a photoshoot by this weekend. I have constructed a dilapidated Victorian set in the middle of my living room, and I am excited to have my model in soon so we can get down to business. And not even in the dirty way. Though I might very well need lube.
Posted by Shannon Buchanan at 6:53 AM No comments:

This reminds me a little bit of the time I have been spending at Busch Gardens lately...

Posted by Shannon Buchanan at 10:16 PM No comments:

Today I have a special treat - a step by step progression of the making of the plague doctor mask that I will be using in my next photo shoot (of which I posted concept art for earlier). I used this guide as a basis for a lot of this, so go ahead and give it a look through, though mine is a bit different. 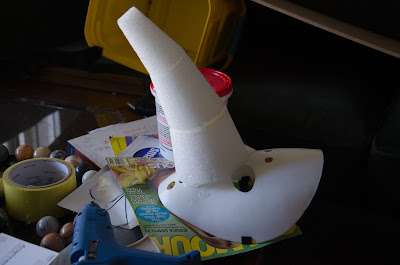 Firstly, I took a Jason-style toy hockey mask and some Styrofoam. I had cut and angled the cone to create a suitable bend, as well as hollowing out a bit of the larger end to make room for the nose of the mask, putting it all together using hot glue. 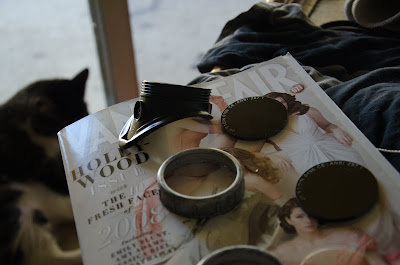 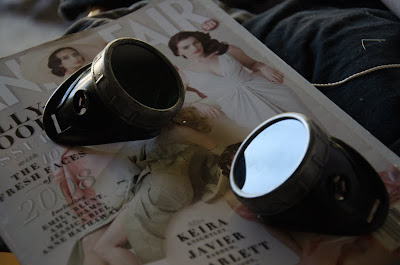 These are pieces of some welding goggles that I ordered. I removed all the strapping and attachments and disassembled the cups. I took apart the cups and used silver spray paint and black acrylic paint to give the rims the look of worn metal. I got them because I wanted those highly reflective black lenses, and figured the goggles were a great twist on the traditional mask, and similar to what I had in my drawing series. The lenses came with some printing on them, so I simply turned them around when I reassembled them. 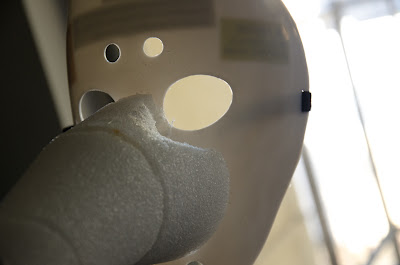 Have to make sure to leave room for the goggles! I later cut, shaved, and formed the Styrofoam to make a smooth organic shape. 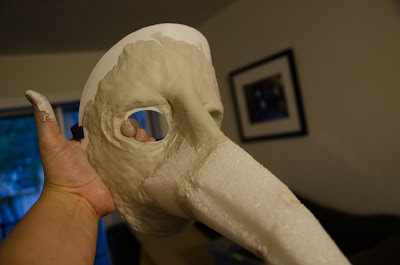 This part differs largely from the tutorial I was using. I knew I wanted a much more pushed forward "face", leading more naturally into the beak, something which would not be easy to do with just paper-mache or spackle. I used an air dry clay, Das clay, which I had never used before so did not know what to expect. It was sort of papery, like a really classy soggy newspaper. It dried white and fairly light. I was able to sand it down nicely to get a nice smooth transition and shape. 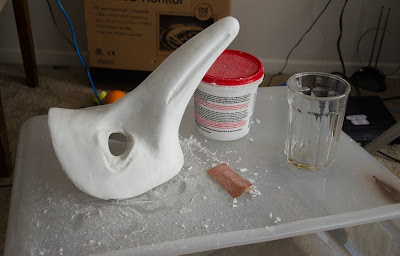 Oops! Skipped some steps. I was getting really into it I guess. Well, this is after I added my first round of spackle. Now, don't get me wrong, spackle is NOT a sculpting material. It was tricky to work with and stuck to my fingers more than it did the mask until I learned the best ways to apply it (let it slide under your fingers, don't push it along). However, in the end it made for a simply wonderful finish that was very easy to sand down. I used some 150 grade sandpaper, but even a hard enough pressure with my fingers sometimes did the trick. 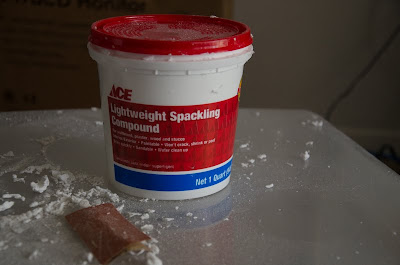 The spackling compound I used. I am really glad I got the lightweight, in the long run. 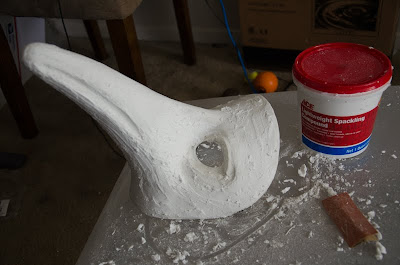 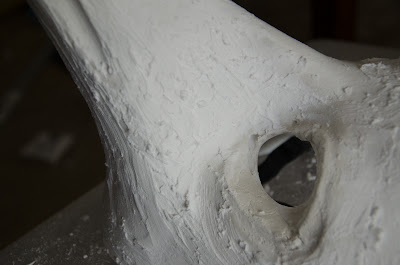 A second round of spackle to cover up some of the trouble spots. Keep in mind that each of these layers had to dry before I could continue. I am not really a patient person. 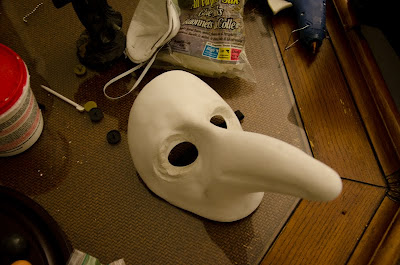 The sanded form after the second application. 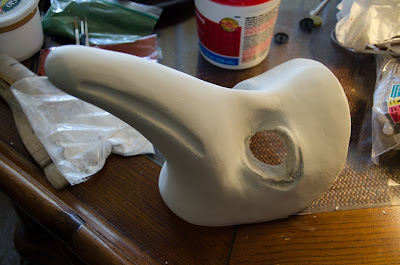 The shape was really good, but there was some various discolorations from Styrofoam poking through and other issues, so I applied a layer of white paint and then some Dulcote matte finish. Ok, a lot of Dulcote. I had some issue with the paint for a bit (only because of my own stupidity, the application is actually a dream) so be warned, the paint will soften the spackle, so it will take it right off if you do something wrong. 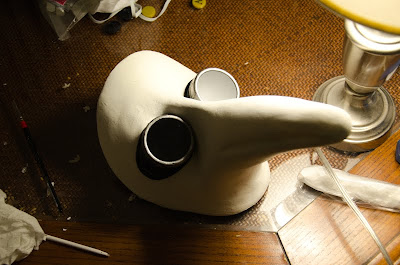 All that was left was to glue on the eyepieces. All done! Well... other than making some new straps for it. I had intended to anyway, for the look of it, but the mask simply became too heavy for the flimsy straps to hold up.

Look forward to seeing more of this mask in the coming days!

In Response to Something I Read

I wonder, for those growing up in my generation, desensitized by media and the internet, if we see images of great atrocities, horrific scenes of death, dismemberment, famine, and holocaust less as warning of what we should not do, not as learning from the mistakes of the past, but as a great beacon hanging above our heads. “This is what people do, given the chance, so it has been, so it will be,” it seems to say, “protect yourself lest you fall into the abyss, feel lucky, do not incite the worst.” There are too many piles of the dead to count, unfathomable numbers in places we have never seen and cannot really understand. It is a powerless feeling sometimes.

I remember watching a documentary about Liberia, about the war torn country, and was unable to look away. Seeing their deaths was one thing, dead bodies has become passe, but there was something captivating and dreadful about how they lived. I have learned of the systematic rape of women in the Congo, and studied just how far people will go, such as the cutting down of neighbors in places such as Rwanda, the genocides and civil wars. The existing lives more of an impression than the remains.

They say post-modernism was in part a response to the failure of the modern world, since the modern world produced devastation and the atom bomb. How can we live, as a people, after the fall of the atomic bomb? But my generation has always lived under it's shadow. Mankind is no longer redeemable, in so much that it seems it is our very nature to make war and reap down the ever present “other”. Virginia Woolf seemed insulted when asked “how shall we end war”, taking issue with the “we,” saying it was a male problem, not a female problem, that women did not make war, did not want war. But I think it is a human problem. Photography has the chance to either give a face to the “other”, and deny the anonymity that makes them easy to kill, torture, to force into naked pyramids and chop up with machetes.

But then... what of Rwanda? They knew the people they killed. Is there any force that can save us from ourselves? Perhaps the role of the image as it pertains to war is changing. I cannot say for sure. The still censor the images of the dead, they still aim to control it, because perhaps we still care about images of “us”, but as the population grows and subcultures become more consuming, how long will that last. Will we go unknowing into the blind void, or drown in the weight of our images?
Posted by Shannon Buchanan at 11:06 PM No comments: